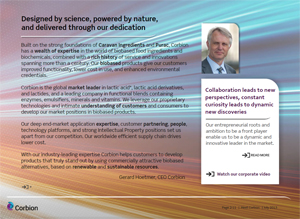 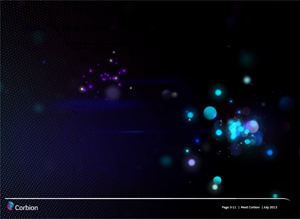 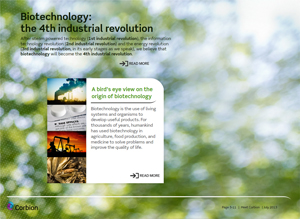 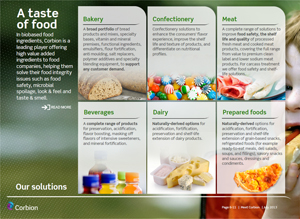 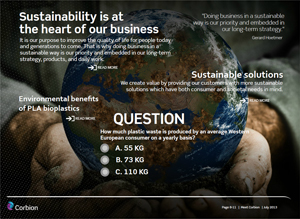 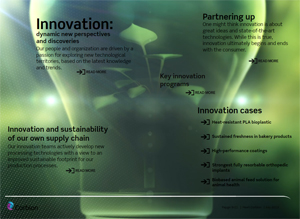 In the meantime, Purac became a center for innovation, focusing on bioplastics, biobased building blocks, and natural preservation solutions for food.

In mid-2012 a major step in the evolution of the company was announced: CSM would divest its bakery supplies activities in North America and Europe, and use the funds to transform into a biobased ingredients company focusing on Caravan Ingredients and Purac. This transformation also meant a new name for the company: CSM became Corbion.

Three years later though, CSM shifted its focus to its B2B activities and sugar started to take up a smaller part of the company. The Sugar Confectionery businesses were sold in 2004. In 2006, the company decided to sell off the sugar production activities, a process that was completed in 2007. This was a historic moment for CSM as sugar had been the heritage business for so long.

In 1986 CSM acquired the Spanish producer of lactic acid, Louis Ayuso SA. By then, CSM had developed a broad spectrum of applications for lactic acid and lactic acid derivatives, which were used in the food industry as flavor enhancers, texture improvers, and natural preservatives. Further uses were found in the pharmaceutical and cosmetics industries, in products such as calcium tablets, dialysis solutions, and skin creams. In the 1980s a high autonomous growth rate was achieved thanks to new applications and sales through the foreign sales offices in the US, the UK, and the Asia-Pacific region. By 1991 the name Purac was used for all of CSM’s lactic acid activities.

Alongside its autonomous growth, CSM also expanded through the acquisition of important users of lactic acid, including the American bakery ingredients producer, C.J. Patterson, in 1988. As with the acquisition of Breddo in 1982, this was the result of CSM’s vertical integration strategy. These two companies were subsequently combined to form American Ingredients Company.

CSM advanced further in the bakery ingredients market with the acquisition of Westco Products (USA) in 1992.

In 1968 CSM started a joint venture with Handelsvereniging Amsterdam (HVA) which had bought Schiedamse Melkzuurfabriek in 1963. This new operation was called the Chemie Combinatie Amsterdam, or CCA.

In the 1980s the investments in biochemicals started to pay off. As a producer of fermentative (natural) lactic acid and lactic acid derivatives, CCA benefited from the popularity of natural food ingredients and biobased chemicals.

CSM gained full control of CCA in 1982 and in July 1983 the first US sales office for lactic acid opened its doors in Arlington Heights, near Chicago. This sales office was called Purac, a contraction of the words “pure” and “acid.”

Besides its lactic acid activities, CSM further diversified its portfolio by entering the branded food business when it acquired Honig in 1978. Over the next several years CSM would go on to acquire a number of branded food and confectionery manufacturing companies in the Netherlands, Belgium, and Germany.

CSM started out as a domestic sugar processing company when the merger between Wester Suikerraffinaderij, Van Loon & Co., Hollandia and Asmij in 1919 created a new, publicly listed company called NV Centrale Suiker Maatschappij (CSM, Central Sugar Company), based in the Netherlands. After changes in European sugar regulations made expansion difficult, CSM started exploring other areas for growth. The company diversified its portfolio into foods and also saw high potential in the chemical industry, especially the biochemical industry. To explore this area, CSM created a research department in 1946 to develop new sugar-based products. It was based in the former sugar factory Hollandia in Gorinchem, the Netherlands.

In 1931 a Dutch company called the Schiedamse Melkzuurfabriek (SMF) started producing lactic acid. Lactic acid was first used in dyes and wool, but later on became a versatile food ingredient.

Caravan Products starts trading as a distributor of spices and flavors

CSM is floated on the Amsterdam Stock Exchange

Lactic acid used as a food ingredient by Schiedamse Melkzuurfabriek

C.J. Patterson patents lactylates in the US

Caravan Products acquires Ira Grob, US, a supplier of mixes and bases

Caravan Products launches Big 7, a base that has mass following and is used in many bakeries

Caravan Products acquires Brokay, US. Bread and cake mixes are added to the product portfolio.

A multi-purpose plant producing ethyl lactate is opened in Gorinchem, the Netherlands

Sodium lactate powder is being produced for the first time at the new plant in Montmeló, Spain (CSM-Luis Ayuso)

a producer of bakery ingredients and user of lactic acid. Along with Breddo, this acquisition was a result of CSM's vertical integration strategy. C.J. Patterson and Breddo together form the American Ingredients Company (AIC).

CSM acquires Westco, marking the beginning of a period of rapid expansion in the US market for bakery ingredients

Construction starts of a Purac derivatives plant in the US (Blair, Nebraska) and a calcium lactate plant in the Netherlands (Gorinchem)

Construction starts of a new plant for Purac Biomaterials

Development of heat-stable PLA for bioplastics

CSM (Purac) announces construction of new biomaterials plant in the US

Construction starts of a new lactides plant in Thailand

CSM and BASF start a joint venture called Succinity, for the production of succinic acid

Corbion’s origins lie in CSM nv, a company whose exploration of several markets resulted in a broad product portfolio that evolved over time while always remaining close to its biobased activities.

How it all started